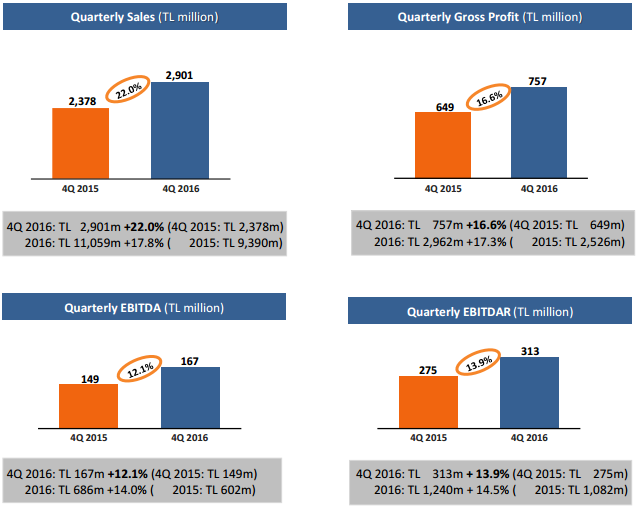 Financial Highlights
Migros recorded robust consolidated sales growth of 17.8% and reached TL 11,059m in 2016. Despite relatively weak footfall in the summer season in vacation towns, 2016 full-year domestic revenue growth was 19.7%. Quarterly domestic sales growth accelerated to 22.9% in 4Q 2016 mainly with the strong performance across all formats. Migros continued to improve its market share in both modern and total FMCG market according to Nielsen.

The consolidated gross profit increased by 17.3% and reached nearly TL 3 billion in 2016. Gross margin of 26.8% was flat in comparison to previous year, however, the Company continued to give value back to its customers as in previous years. Vigilant cost management offset the impact of employee cost and rent cost increases to a great extend in 2016. The consolidated EBITDA (Earnings before Interest, Taxes, Depreciation and Amortization) was TL 686m, with a 14% increase in 2016. EBITDA margin was 6.2%, in line with the full year guidance of 6.0% to 6.5%. EBITDAR (EBITDA before rent) rose by 14.5% y-o-y in 2016, representing a margin of 11.2%.

The Company’s operational profitability is undermined by mostly non-cash FX losses and one-off charges resulting in a consolidated net loss of TL 293m in 2016.

Moreover, the acquisition of Tazedirekt by Migros was an important technology investment, which set the course for a pioneering online sales development of fresh and natural food product categories.

Organic growth continued with the same pace with 232 new stores including 1 Ramstore in Macedonia, which were added to the store network of Migros in 2016.

In conclusion, Migros delivered on all its targets in 2016; for new store openings, sales performance as well as EBITDA.

Migros aims to open 120 to 150 new stores in 2017 organically. Consolidated sales growth of Migros, including sales turnover of Kipa for 10 months, is expected to be between 30-35%. Migros aims to reach the EBITDA margin range of 5.0-5.5% on consolidated basis including Kipa in 2017. 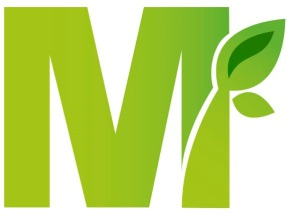 Özgür Tort, CEO of Migros Ticaret A.Ş.: “This acquisition is a clear indicator of our confidence in our sector and our country. Migros will be doubled in four years”

Mandatory cookies are cookies that are required for the proper functioning of the online services placed and offered on your device while viewing the Platform.

Performance cookies allow us to track and analyze the number of people viewing the Platform and the Platform traffic. Through these cookies, we can obtain information such as on which areas in the Platform are visited most frequently or infrequently, and we can optimize the traffic of the Platform.

Marketing and advertising cookies are used to promote personalized products and services to you in accordance with your viewing history and visitor profile on or off the Platform.